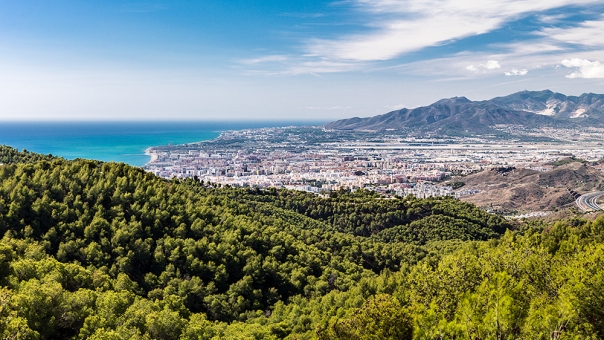 Montes de Málaga  Natural park is located in the north of the Málaga city.

It occupies 4,966 ha in the municipatilies of Málaga, Casabermeja and Colmenar.

It is a medium size mountain with altitudes ranging from 100 to 1,000 meters.

During the 15th century Montes de Málaga were covered with a mediterranean forest with Holm oaks,Cork oaks, Gall oaks, Strawberry trees, Rockroses, Heathers, and others.

At the end of that century after Málaga city was conquered by the Catholic Monarchs, the vegetation and land uses of Montes de Málaga and of basin of Guadalmedina River were modified substantially.

The forest was cut down and burned and was changed into an agricultural landscape mainly covered with vineyards and Olive trees.

In the last quarter of the 19th century the phylloxera arrived, a pest of grapevines which slowly destroyed most vineyards of Montes de Málaga.

Between the 16th and 20th centuries, Málaga city suffered from numerous floods.

The forest destruction in the basin of Guadalmedina River, the agriculture abandonment after the phylloxera, the marked slopes and the scattered terrain of Montes de Málaga contributed to repeated flood events un Málaga city.

To put an end to this problem, in the second quarter of the 20th century a redorestation was made in the basin of Guadalmedina River with pinus halepensis, which gave rise tí Montes de Málaga Natural park.

Nowadays this Natural park has an important protective and ecoligical value and is used for the spare time and fun of the Málaga people.

We can distinguish three different environments.

The most widespread is the pine forest, that shows high densities and very nature áreas.Also, there are areas with oak groves mixed with pibe forest and Elm trees, Wild Olive trees and carob trees.

The forest has a high scrubland with Strawberry trees, Heathers, Mock privets and Laurestinus.

The last environment, the most characteristic of the Natural park, is firmes by agricultural lands covered by Olive trees and by Almond trees mixed brooms.

In the Natural park there are numerous forest raptors and birds as the Booted eagle, the Short-toed eagle, the Goshawk, the eagle owl, the Tawny owl, the Sparrowhawk, great spotted woodpecker, and others.

Also, diverse carnivores occur in the Natural park as the Eurasian badger, the Beech Martens and the small-spottec genet.

Undoubtedly, the Wild boar is the mammal with the biggest growth un the Natural park.

The Common chameleon is the most characteristic reptile and ir occurs in the most southern region of the Natural park.